Plant Yourself in a Healthy Lifestyle… And BLOOM!

You Say Portabella, I Say Portobello… 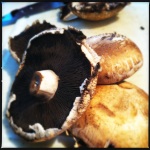 However you choose to pronounce the name of the giant mushroom, one thing cannnnnot be denied – it’s delicious!  And nutritious!  And, as I discovered in this TED video, they might save the world!  Hmmm… what would a mushroom superhero be named?  The Mushinator?  Super Shroom?  Spore?  I also discovered – through the TED genius – that funghi is pronounced fun-jie, not fun-guy.  Like Sanjaya, but different…

Funjaya?  The next American Superidol?  We may be on to something, people!  In the meantime, back to the fungus-among-us…

I was researching portobellos with the ultimate goal of finding a fun new recipe.  And when I saw some substituting portobellos for pizza “crust”, instead of dough, I just had to try it out.  And… OH WOW!  We were singing with joy!

There’s really no recipe, it’s just prepping the mushrooms properly and then going for it!  Fun(ghi), right?!  Right.

1/2 c. shredded cheese – I did three with cow’s milk mozzarella, and three with this new (to me) vegan cheese… which is amazing!  Very mellow flavor, melts great! 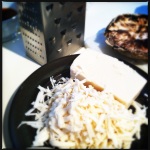 Using a spoon, carefully scoop out the insides of each mushroom, to create a little “bowl”. 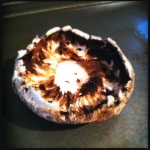 Lightly rub the mushroom caps with a little olive oil, place on non-stick (or sprayed) baking sheet and pre-bake for 5 minutes. 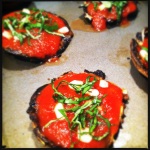 … then cheese and herbs.

Bake for up to 15 minutes.  Well… 15 minutes-ish.  Because I used two different cheeses, I had to keep my eyes on the prize(s).  The mozzarella melted faster, so I took those out first and we had them as our appetizers – perfect! 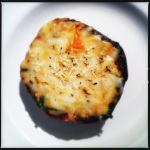 When we tried the vegan cheese version, we realized that they actually had a liiiiiittle more flavor!

Both were fantastic, but the vegan cheese really allowed the other ingredients to truly shine!  Love experimenting like that!

I love SO many things about these pizzas, but the fact that they are SO easy to shop for, prepare and cook is way at the top of the list!  We had a green salad on the side and it was a fantastic dinner – perfecto at the end of a busy day!  What’s your favorite quick and easy dinner?

Well, I hope you have a weekend that is full of fun(ghi) and makes you want to sing, sing a song!  Until next time…

Once Upon a Time…

… every family had plenty of nutritious food, and all the children skipped merrily to school each day toting along a healthy lunch, and…

Wouldn’t it be great if that were a true story instead of a fairy tale??!!  Well, if the amazing people at Share Our Strength and Cooking Matters have anything to do with it, we’ll all be skipping merrily, merrily, merrily ‘cuz life will be even better than a dream!

I found out about Cooking Matters while having lunch with my fabulous – and philanthropic – pal, Merlin.  When I told him I was seeking a volunteer opportunity, he recommended it because he knows how much I love to cook and teach people about healthy eating, and that my foot would be the perfect fit for that little glass slipper!  The focus of the program is to teach families how to shop for and prepare healthy, low-cost meals.  They have series of classes with different focuses, each led by a chef instructor and a nutritionist.  It’s amazing!

Friend and I immediately signed up for the two-hour orientation.  The first part explained how the program works, and the last half was a demo of how a class would run.  Mayra, the lovely Program Director, asked us nutrition questions, and Chef John – a supah-stah volunteer! – led three members of the group through a little knife skills lesson.

He showed us how to hold a knife properly, and also how to quickly and easily chop peppers, carrots, celery, and… something purple I can’t remember….

I can’t tell you how much I LOVE this idea, I am suuuuuper excited about it!  To be an official volunteer (I am going to be a classroom assistant), I needed to shadow a class and I knocked that out last week.  It was SO fun and I truly learned a lot, including the recipe for this white bean dip that is quick, simple, inexpensive and delicious.  I loved it so much I made it to take to a dinner party over the weekend!

Toss it all in a food processor and blend until smooth-but-not-too-smooth.  The End! 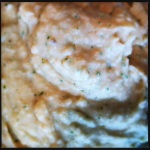 I decided to serve the dip with a bunch of fresh veggies, and used a bell pepper as the serving vessel for the dip…

Cute, right?!  And isn’t it good to know that there’s bean dip at the end of the vegetable rainbow?!

If you’d like to know more about being a volunteer for Cooking Matters, go to this link.  You’ll be so happy you did!

I am so inspired by Cooking Matters that I am planning my own healthy cooking classes starting in late September and the first one is going to be Healthy Lunches for Healthy Kids!  When I have the whole story worked out, I will post the details!  Or, if you prefer, read it them to you before you go to sleep some night…!  In the meantime, my carriage is about to turn into a pumpkin… that I will want to roast or turn into a yummy pie.  Of course.  🙂

Until we meet again…